I need help with finding an old topic on xb8000 ais connectivity. I am still having the problem of losing ais targets after a few hours of cruising and having to reboot my pc only for targets to last a few minutes before dropping again. I run ce on a bigbay pc with windows 7 and the xb8000 is connected by the usb cable and on com port 5. When it drops the port configuration page in ce has an error message that I will write down the next cruise. There was a topic for this years ago I can no longer find but I’ve done everything suggested so far to fix the problem. It has returned once I start cruising more than 4 hours but wasn’t happening for a couple seasons.

Yes. Please provide us the error message, or perhaps a screenshot the next time you experience the problem so we can investigate.

And here is a link to the old forum’s topics regarding Vesper in case one of them helps: https://www.coastalexplorer.net/search?query=vesper

Attached are a couple pics of the Com 5 error message I had after I last lost my AIS contacts. As a review of the issue my XB8000 is connected to the front of the PC in a USB port listed as Com 5 in Coastal Explorer. I still had the contacts viewable on the Watchmate App on my Galaxy phone so the XB8000 is still working when the loss occurs on CE. I haven’t had the issue since June and I’ve cruised for 3 weeks in the San Juan’s in July and August but only for up to 4.5 hours per day at most. The loss of AIS contacts seems to occur randomly after 5 hours of cruising but more often after that on the same cruise day. I have to reboot the pc to bring it back. Cycling Coastal Explorer off and on doesn’t fix.

I just upgraded my Nav PC from Windows 7 to Windows 10 yesterday so I’ll see how that does on our Labor Day weekend cruise which will be 6 hours each way to Oro Bay Anderson Is.

Thanks for your time! 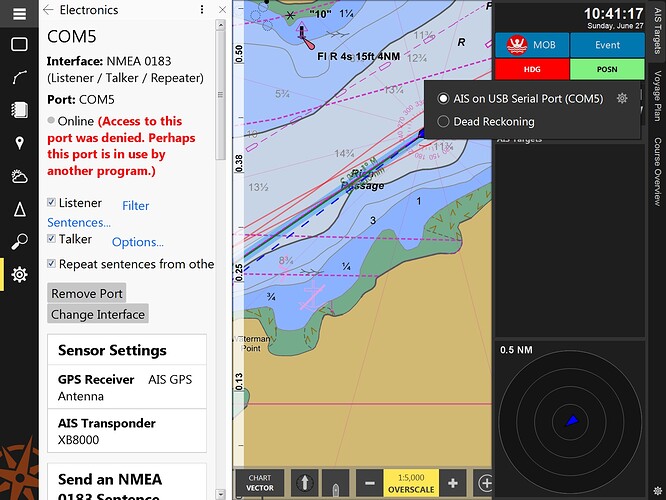 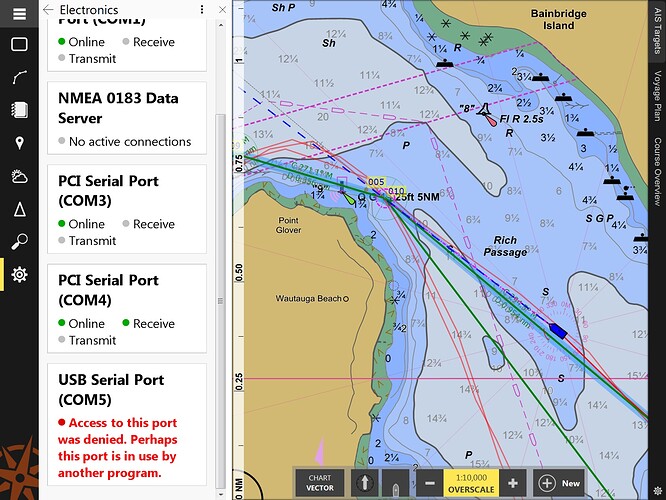