Electronics Tab shows that Ari Temp & Barometric Pressure are being received by the application but the gauges do not display the values?? 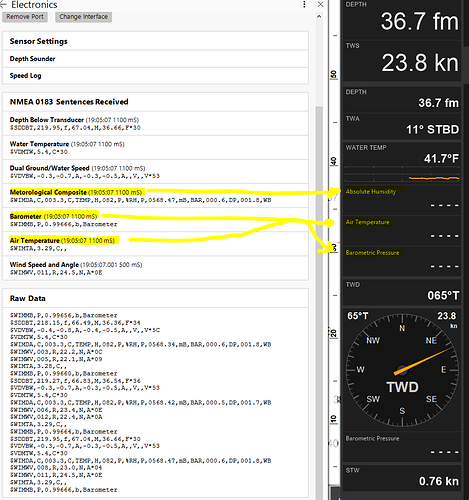 All three of those sentences are incorrectly formatted so they probably won’t work with anything. However, Coastal Explorer does not support the $WIMMB or $WIMTA sentences so those wouldn’t work even if they were correct.

These sentences were all made obsolete years ago and are “not recommended for new designs” by the NMEA so we have not been aware of any devices that still used them. Can you tell me what device is sending these?

Hi Brad,
Its an RMYoung met station. I removed those two feeds ($WIMMB and $WIMTA). I left the $WIMDA composite, which has the information but those sensor still don’t display even though they are contained in the composite. Any ideas?

The $WIMDA sentence is also incorrectly formatted, in multiple ways. The parameters after the $WIMDA part should mostly be numbers followed by specific letters (except one sequence of numbers without letters). The number and letter combinations are in a specific order which indicates what they mean. In this case, the parameters start with a letter and include things that should not appear such as TEMP, %RH, mB, BAR, DP, and WB. It is completely wrong, so there’s no way it could be used by any program. It’s almost as if the sentences are getting merged with parts of some other sentences. However, that is probably not the case given how consistently wrong they are in your screenshot. Perhaps there is a firmware update for the device that fixes this?