ETA to a specific waypoint along the route (drawbridge)

I see we have ETA to the current active WP, and ETA to the end of the route.
I’d like to select a WP along the way and make it a scheduled WP. Then an instrument panel item would show ETA to scheduled WP. (This might be a
scheduled drawbridge, or a rendezvous for fueling, or whatever that has a target time.)

In the fullness of this feature, you might be able to set the scheduled flag property on a number of WPs, and when the route is followed, the scheduled instrument
would automatically step through as each is passed, just like the general WPs.

Hey Tom. There is an instrument called route monitor that has a running list of waypoints that click off as you pass them. On the list you can see the name of the waypoint, or number if you have not named them, the distance to that waypoint and an eta to it at your present speed. Just open the instrument panel and find route monitor and move it over to a tab, I call the tab I use “route nav”. Was this what you were after? Hope it helps. 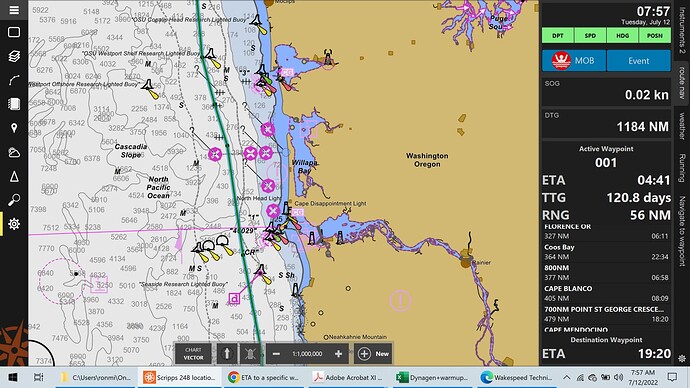 Thanks! I didn’t know about that. It does offer a solution for the mean time,
but I’d like to leave my question in as a feature request. The main problem with using Route Monitor is that for a route with 100+ waypoints (mostly simple turn
points for curving inland waterways), I have to scroll way down to find the one scheduled waypoint. I see the ETA, but as soon as the boat hits the next (much earlier) WP, the window resets and I can’t see the ETA without scrolling down and finding it again. So, setting a waypoint to be scheduled, in my view, would pin it
to a list of scheduled waypoints displayed in a new Scheduled Waypoints or Monitored Waypoints instrument.

The route monitor instrument has an option, selected by default, called “Show unnamed waypoints.” If you turn that off, it will only show waypoints that have been given names, making the list of waypoints arbitrarily shorter depending on how many you give names to. To turn it off, right-click on the route monitor instrument and click the “Show unnamed waypoints” menu choice. Hopefully that helps.

you can check off feature request already implemented.

Not so fast!
It turns out, of course I was using the route monitor instrument! I just didn’t know it had that name. (It comes as part of the new install defaults, I think.) My problem is the interim waypoints don’t show on my route monitor (yes, “show unnamed wps” is checked.) However, on 3 different PCs with CE, two don’t show the
interim WPs, one does! I’m guessing this is a bug, unless I’m missing something.?? I don’t see any way to resize/enlarge the route monitor if that was the problem… 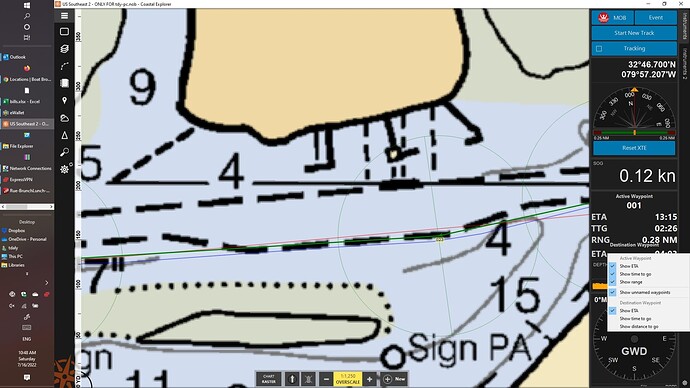 Looking at your route monitor, it appears that it doesn’t have enough space to display the area between the active waypoint and the destination. That instrument will expand vertically when there is room to do so. In your case, it has shrunk to it’s smallest possible size, leaving no room for the intermediate waypoints. Try either removing some other instruments, or put it on an instrument panel with more space–it needs “breathing room.”