Finding NEMO, caution on using wifi only iPad for navigation 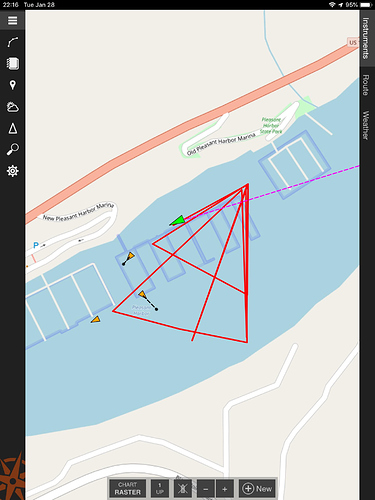 gps1536×2048 180 KB
Caution on using the onboard ipad GPS while navigating. This screenshot was a track for just a few minutes using the onboard sensor. After a few minutes of being on my ships wifi network, CE on the ipad found the NEMO data aggregater and synced with onboard Furuno GPS, the Sat compass for heading and several other data streams. I was in the process of looking to find the way to search for NEMO when it did it on its own. Took about 5 minutes.
Be super careful if you are attempting precision navigation during low visibility. The distance between where we are docked and a few of the position points is over 100 yards.
GregEigsti January 30, 2020, 12:23am #2

Welcome to the forum @RVZephyrRon! A few questions for you.

I assume that the jitter went away once Coastal Explorer on the iPad found your NEMO?

What model iPad are you using, does it have cellular/gps capability or is the iPad getting its location from another device (e.g. tethered to an iPhone, Bluetooth GPS, etc.)?

Assuming that things got better when CE located the NEMO… I wonder if the difference between the iPad and Furuno’s GPS antenna placement and local obstructions played a role? My iPad Pro 11 with cellular (includes onboard GPS) does not exhibit the same jitter FWIW.

Thank you for the feedback!
Greg

@GregEigsti Yes, went solid as a rock once it found NEMO, we have a commercial grade IMO approved Furuno (DGPS-150) Also, a steel pilothouse, although the ipad is in a window. No cellular on the ipad, location only through built in GPS. The Furuno GPS antenna is centered on the pilothouse on a short mast. The iPad is a 6gen running 12.2, (Costco $400) so not one of the high end ones.

iPads without cellular capabilities don’t have built-in GPS sensors and rely on Wi-Fi tricks to estimate your location.

Soon, the POSN sensor status indicator on the instrument panels will have a popup to let you know where Coastal Explorer is getting its position information and let you select which source to use when you have more than one. When Coastal Explorer is using the internal sensor or the Wi-Fi tricks, that popup will include an estimated accuracy.

I had no idea that was the case, thanks for that. Explains the sporadic positioning. Perhaps the CE app should limit use of positioning based on wifi “tricks”, could be a big problem for some users. I would like to lock that option completely out. I would rather have a warning of lost GPS than a shift to a very sketchy position.

I didn’t know this either when I bought my newest iPad. I did purchase a lightning gps gadget called Bad Elf. Got it from amazon. Works great

There used to be an app that would share a phone built in GPS with other devices via bluetooth, I used it on a PC for navigation, as well as on a windows tablet. I looked into this and to do it for iPad is difficult, rooting required, bunch of other nonsense. The bad elf looks like the best way, but expensive compared to other GPS bare bones receivers. Which Bad elf device did you get?

There is this also https://smile.amazon.com/dp/B07M9CZYTD/ref=dp_cerb_1 Garmin Bluetooth GPS ~$100

Currently under way and running CE for Windows alongside the iPad app. Both getting a data stream from the Nemo. At one point the iPad showed me on land and when I tapped the instrument tab only the POSN status was lit green, the other 3 were red. So it looked like the iPad had lost the data stream and went to WiFi tricks for position. There was no warning, there should be.