I have an NMEA stream over UDP and the iPad app seems to be processing everything (Wind and AIS), except for Depth. When I look at the sentences received, I see $SDDPT sentences, however, I can’t get the DPT instrument to display anything. Is it possible the app isn’t processing the DPT sentence correctly?

See the image below. There are a couple of DPT sentences toward the bottom of the raw data, however, I never see the value displayed on the instrument on the right of the chart. Incidentally, the PC version of CE does show depth with the same NMEA feed. 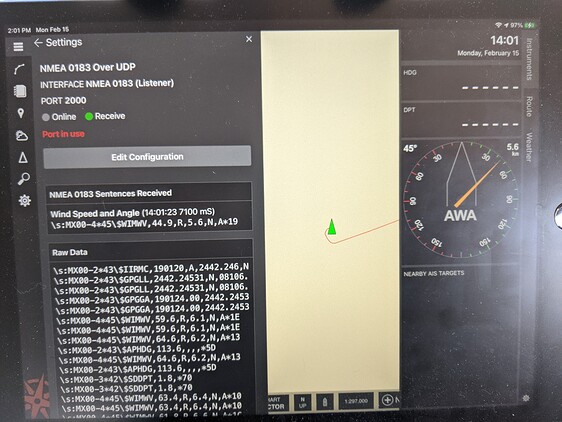 Thanks for the screenshot! It looks like that DPT sentence must be from a very old NMEA 0183 device as an additional parameter was added to that sentence by the NMEA in 2001. The new Coastal Explorer was created using a (much) newer version of the specification, but we’ll go ahead and make that last parameter optional in the next update.

EDIT: Turns out the newer code does handle the older form of this sentence. The real problem here has to do with the “TAG block” which is the part between the ‘’ characters before the sentence. They appear to be valid in the screenshot, but Coastal Explorer is not “processing” them correctly. This is affecting everything other than the wind speed and angle, not just the depth. Well get this fixed for the next update.

Is there a timeline for the update that includes this fix? I am actively cruising, but haven’t spent much time with the new CE app because I can’t get depth.

This should have been fixed by the update we released a couple of weeks ago (version 1.0.4). Are you still having this problem with that version?

Ok, missed the update… just updated and it is fixed!